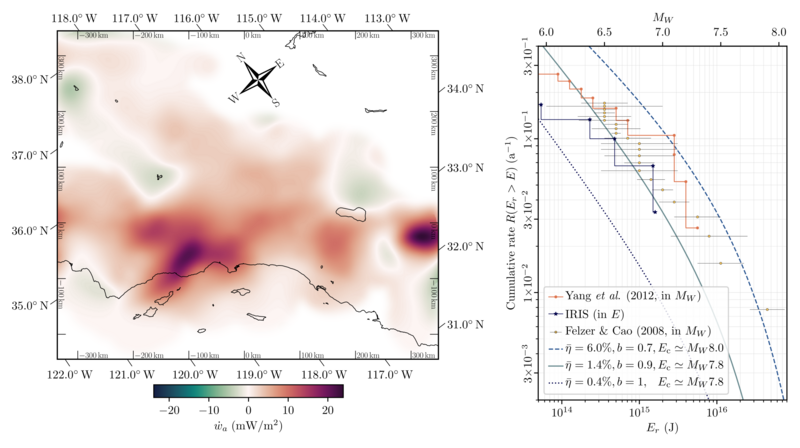 A fundamental aspect of seismic hazard assessment is to determine the average recurrence time of large earthquakes. Since in most places, these recurrence times are large compared to the history of direct instrumental observation, complementary approaches are important. Many of these additional methods focus on the long-term balance of seismic moment, a kinematic measure of earthquake size that is proportional to slip on the faults. Using the balance of seismic moment, additional information from geologic and geodetic data can be introduced to seismic hazard assessment, for instance by the use of global navigation satellite systems (GNSS).

In the recent study “Applying conservation of energy to estimate earthquake frequencies from strain rates and stresses” published in Journal of Geophysical Research: Solid Earth, the authors have derived a framework similar to the seismic moment balance approach that is instead based on the conservation of energy. “Working in energy space has the advantage that the radiated energy is a better predictor of the damage potential of earthquake waves than the seismic moment release” the authors argue. The “Energy-conserving seismicity framework” (ENCOS) can be applied to stationary seismicity processes and balances the power a long-term deformation process introduces into a volume of rock with the energy released in earthquakes. Compared to the established methods that are based on the balance of seismic moment, the new framework based on the energy balance has to consider also the state of stress in the Earth crust.

To test the framework’s feasibility, the authors have applied ENCOS to Southern California, where the tectonically driven elastic energy accumulation rate has been estimated using Global Positioning System (GPS) velocities and stress data from the World Stress Map. Within uncertainties of the parameters involved, the estimated earthquake occurrence rates are consistent with instrumentally observed and historical earthquake catalogs.

An important design aspect of ENCOS is a straightforward implementation of any long-term earth system process that can potentially drive seismicity, making it simple to connect to different components of earth system modelling. This is aimed to be achieved by a fault-agnostic volume approach and the formulation in energy space: “This can potentially present an opportunity in cases where energy as an interdisciplinary language is more accessible to a problem description than seismic moment.” the authors give as a perspective.