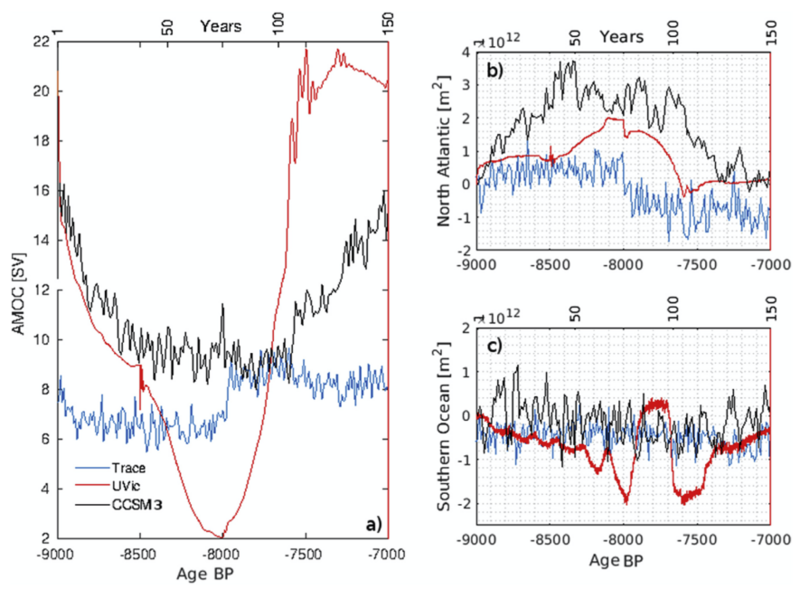 Luciana Prado is a Post Doc at the Climate and Cryosphere Lab, University of São Paulo. She participated in the ESM Summer School in 2019 in Bad Aibling.

In this article, she explains the scope of her work, where she aims to investigate the impact of freshwater forcing on the South American Monsoon System (SAMS) during the 8.2 ka event, and how Perturbations in the Atlantic Meridional Overturning Circulation influence the oceans heat budget and the resulting effects on the climate.

The transition from the early to the mid-Holocene (11.7 to 4.2 ka) was characterized by the final collapse of the Laurentide ice sheet, mainly from the 8.2 ka meltwater pulse until ~6.8 ka. The disintegration of the North American ice sheet resulted in an input of freshwater in North Atlantic, altering the production of the North Atlantic Deep Water (NADW) and thus the strength of the Atlantic Meridional Overturning Circulation (AMOC).

Two simulations with the Community Climate System Model version 3 (CCSM3) from the National Center for Atmospheric Research (NCAR) were used. The first is the TrACE21ka experiment, a transient simulation from the last glacial maximum (21 ka) to the present (0 ka). This simulation is forced with transient orbital parameters and greenhouse gases concentration, and reconstructions of meltwater forcing and ice sheet. The second simulation is a climate state in equilibrium, ran with 8.5 ka boundary conditions, except for the freshwater forcing. The freshwater forcing varied between the two simulations in both magnitude and timing. A third simulation was performed using the isotope-enabled University of Victoria Earth System Climate Model (UVic), forced with freshwater input and a virtual salt flux.

Results point to a strengthening of the SAMS during early Holocene due to meltwater pulses. Decreased northward heat flux in the Atlantic Ocean warmed South Atlantic and weakened southeasterly trade winds, contributing to an increase in precipitation in South America.

Perturbations in the AMOC result in changes in the ocean heat budget with consequences to the atmospheric circulation. It changes the ocean heat flux in the Atlantic Ocean, with impacts on sea surface temperature and location of the Intertropical Convergence Zone. A decrease in NADW production due to meltwater pulses weakens the AMOC and warms the South Atlantic by decreasing the northward heat flux in the ocean. Atmospheric circulation is then impacted by the SST changes in the South Atlantic that disturb wind and pressure fields, and moisture advection, altering the South American Monsoon circulation and the precipitation regime in South America.

These results are relevant to the understanding on the causes of AMOC perturbations and effects on climate, and also to the observed weakening of the AMOC as a consequence of current global climate change.

Read our interview with Luciana on our After School page.