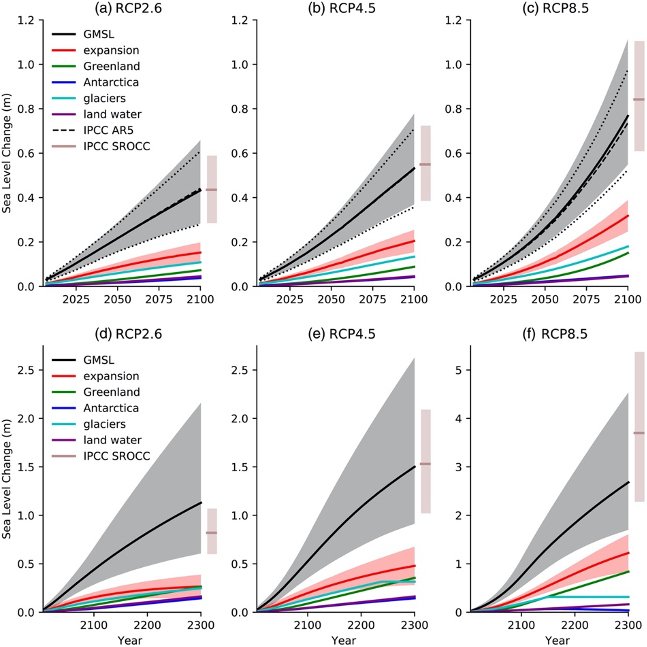 In 2019, the IPCC Special Report on Oceans and Cryosphere in a Changing Climate (SROCC) was published. It estimated that the global-mean sea level (GMSL) is going to rise at accelerating speed in the future, primarily resulting from melting of land-based ice and thermal expansion. Also, local sea-level rise exacerbates extreme events and coastal hazards, being the main contributor to future flood risks. For this reason, information on the future sea-level rise is essential for successful adaption planning and therefore very important for coastal decision-makers.

A new research article published in Earth’s Future entitled “Exploring the Drivers of Global and Local Sea-Level Change over the 21st century and beyond” focused on a set of global and local projections for sea-level change under the RCP2.6, RCP4.5, and RCP8.5 climate-change scenarios, extended to the year 2300. This work was a collaboration of authors working at the Met Office UK, the GFZ, the Universities of Reading, Potsdam and Urbino, with contributions from the Royal Netherlands Institute for Sea Research.

The projections for sea-level change presented in this paper are based on the UKCP18 projections, a UK government-funded project for climate projections running up to 2100, which are based on the CMIP5 model simulations. The same Monte-Carlo approach (random sampling of initial conditions) used for GMSL projections in the IPCC 5th Assessment Report of Working Group 1 (AR5) was adapted here with some minor changes and extended to local sea-level projections.

Furthermore, a new set of exploratory projections extended to 2300 was introduced here, based on an emulated ensemble of CMIP5 models. The model uncertainty for the simulations out to 2300 was broken down by sea-level component, considering the dependence on geographic location, time horizon and emission scenario.

The local sea-level projections were carried out selecting a number of tide-gauge locations around the world. The locations were chosen based on recordings that are long enough to estimate local sea-level variability properly. The focus on a limited set of tide gauges allows a deeper exploration of the drivers and uncertainties in future sea-level change. In addition, the authors also made use of satellite altimeter observations.  According to Gregory, J.M., Griffies, S.M., Hughes, C.W. et al. Concepts and Terminology for Sea Level: Mean, Variability and Change, Both Local and Global. Surv Geophys 40, 1251–1289 (2019). doi.org/10.1007/s10712-019-09525-z different estimates of local sea-level variability due to GRD (Gravity, Rotation, Deformation) as well as due to GIA (Glacial Isostatic Adjustment), the latter based on previous studies, have been made.

The main findings of this research article are manifold. A consistent set of local sea-level projections was developed here, which is directly traceable to the GMSL projections of AR5 and preserve the relationships between components. A combined analysis of both local mean sea-level (MSL) projections and tide-gauge records suggests that local sea-level variability will dominate the total variance in sea-level change, especially in the coming decades. By extending the model simulations to the year 2300, the large degree of committed sea-level rise could be illustrated, which applied even in strong mitigation scenarios. Even though the extended simulations are associated with a much greater degree of uncertainty, the findings highlight the need for developing site-specific MSL projections.