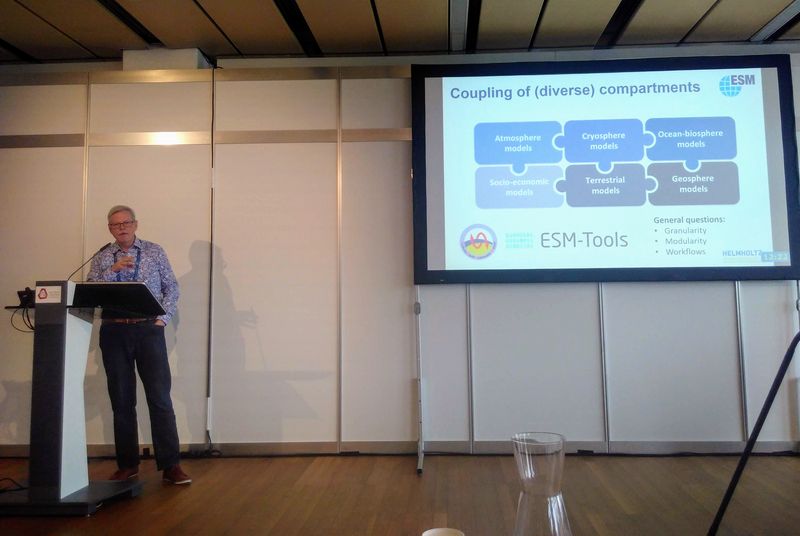 The ESM project aims to strengthen Earth system modelling capacities through a collaborative approach among eight centres of the Helmholtz Association. The implementation of ESM involves the development of Earth system components and their coupling, the use of Earth system data assimilation, designing and carrying out frontier simulations, and the development of a long-term strategy, that includes external partners. With a team of leading experts in the field, the ESM project has delivered very promising results in its first two years and it is set to achieve its goals.

Modelling and Data Assimilation: ESM and its “hardcore” science

Considerable progress has been made in the field of high-resolution ocean modelling. GEOMAR has established the new Earth system model "Flexible Ocean Climate Infrastructure (FOCI)" with nesting capability in the ocean, which enables the use of high resolution in selected regions and ocean basins and whose applications have successfully shown flexibility and efficiency. At the AWI, the finite volume version of the FESOM model (FESOM2.0) has become a scientific workhorse, after it was extensively tested on frontier grids with locally refined resolution up to 4 km.

The field of Earth system data assimilation, which seeks to optimally combine observations and Earth system models, is jointly tackled within the framework of ESM. A collaborative effort driven by AWI, FZJ, GFZ and HZG has advanced the methodological developments for data assimilation, whereby the Parallel Data Assimilation Framework (PDAF) has emerged as a central tool in other models. At the same time, the set of observation operators for data assimilation was significantly extended and implemented. This includes data from satellite altimetry, oceanic gravity fields from synthetic SMART cable observations as well as satellite-based magnetic field observations.

Computing technology at the heart of ESM operations

Major steps towards a common Earth System Modelling platform have also been made with lots of examples of new coupled systems (e.g., EMAC-FESOM2). The ESM-Tools software package was developed at AWI to unify the model infrastructure and provide a common framework for downloading, compiling, executing and organising coupled or uncoupled models on different supercomputers in Germany.

The cluster module of the new Jülich Wizard for European Leadership Science (JUWELS) was installed and commissioned at the Jülich Supercomputing Centre (JSC) on 18 September 2018. Part of the system—the ESM partition—is now used by the scientists involved in the ESM project to carry out so-called “Frontier Simulations”, a set of cutting-edge numerical experiments to contribute to solving environmental challenges, for programme-oriented research.

In an effort to transfer excellent scientific knowledge and create a legacy for the project, the ESM project is committed to create opportunities and platforms where future generations of scientists can learn to master technical and methodological instruments for advancing research in Earth System modelling. In this context, ESM partners organised workshops and seminars providing their facilities and expertise, such as the first ESM User Forum held in Jülich in February 2019, the Helmholtz GPU Hackathon 2019 and the Summer School in Atmospheric Chemistry and Dynamics 2018.

As a consortium, the ESM project team also organises the Earth System Modelling Summer School that will take place in Bad Aibling (Germany) on 9–19 September 2019. The school will welcome 50 participants, including early career scientists from the ESM partner institutions and from the national and international community. It will offer an extensive set of lectures and hands-on sessions on modelling, coupling of Earth system components and computing. The ESM summer school will make the expertise of leading professors and researchers from Helmholtz centres and other European institutions available for younger generations.

The ESM project will continue within PoF-IV. More specifically, it will be a central cross-cutting activity in the joint programme "Changing Earth—Sustaining our Future" of the Research Field Earth and Environment. The ESM project contributes centrally to seven of the nine Topics:

The ESM project will be part of the so-called Synthesis and Communication Platform and in this context one of three central pillars of Earth System Modelling in the Helmholtz Association in PoF-IV alongside the ESM Partition at the Jülich Supercomputing Center (Hardware) and the Joint Lab Exascale Earth System Modelling (making model exascale-ready). ESM is also an integral part of the research area Aerospace and Transport for the future Helmholtz funding period.