An investigation of secondary flows in shallow ocean straits near Denmark 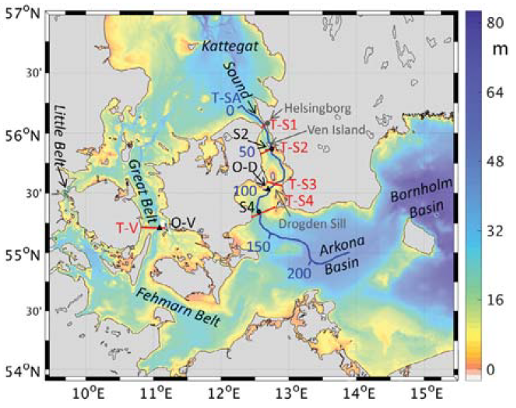 Fig. 1 Topography of analysed area along the transition zone between the North and Baltic Sea (NBTZ).

Straits that connect estuarine to ocean basins generally enable the influx of low-salinity water at the surface and the efflux of saline bottom water. The analysis of such ocean dynamics is particularly important to fully understand the structure and behaviour of flows in a realistic ocean strait.

In this study, recently published in Ocean Modelling, Verena Haid and colleagues from the Helmholtz-Centre Geesthacht analyse and compare the observations and numerical simulations of flows in shallow ocean straits of the North Sea - Baltic Sea Transition Zone (NBTZ). The straits are simulated by the semi-implicit hydrodynamic model SCHISM on scales of up to 100 m resolution. This model is based on unstructured grids, which avoids using one-way nesting techniques and provides sufficient horizontal resolutions of dominant small-scaler processes. Since strait dynamics of the NBTZ are mainly influenced by fluctuations in atmospheric conditions, this research focuses primarily on subtidal periods.

“One goal of this study is to clarify similarities and differences between along-channel and secondary dynamics in estuaries and straits” the authors explain. “It is important to recognize that straits allow two-way transport at both ends of the channel, unlike the tidal rivers.”

As assumed by Dr Haid and colleagues, there are important and not yet fully understood interactions between regional ocean basins and straits. The authors investigated the role of straits on the hydrodynamics of the NBTZ in three different straits: The Little Belt, the Great Belt and the Sound. The impact of resolution, the role of atmospheric forcing and the two-layer water transport in the individual straits were examined in these individual straits.

Overall, the authors demonstrated that SCHISM is a suitable model ensuring credible numerical simulations of both the along-channel flow and the lateral circulation in the channels of the NBTZ, in particular thanks to a high-resolution feature. The comparison between model simulations using different horizontal resolution in the straits indicate fundamental differences at temporal and spatial scale characteristic for the secondary circulation. These differences are due to the non-adequate resolution of small-scale physical processes if coarse resolution is used. Among the outcomes, a significant discovery is the development of helical cells, which suggests substantial contributions to the strait dynamics, in northern (0 km – 80 km) and southern (100 km – 130 km) parts of the Sound. These helixes do not appear over the shallow Drogden Sill, where the enhanced mixing substantially changes the dynamics. 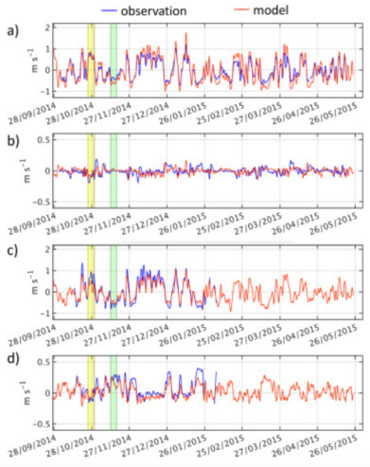 Fig. 2 Comparison between model and observational data of axial (a,c) and lateral (b,d) velocities at 5 m depth in the Sound (a, b) and Great Belt (c, d). Green and yellow shades indicate inflow and outflow periods respectively.