Data modelling and analysis of barotropic tides and mesoscale processes 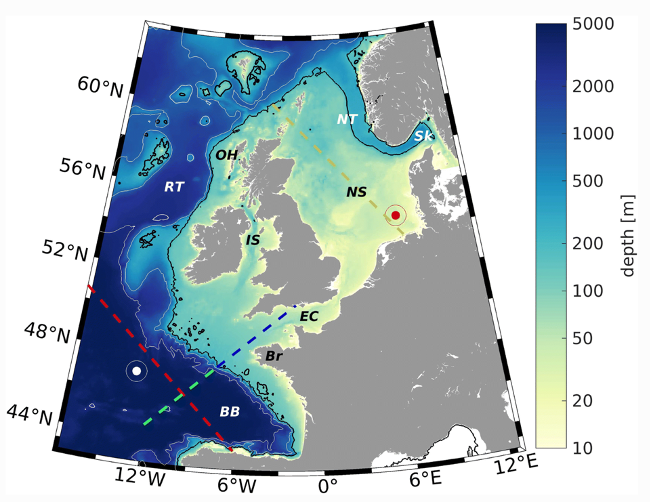 The interactions and influences between tides and mesoscale processes like ocean eddies are still relatively unknown, especially considering scientific proof that tides influence turbulent mixing in shallow seas. To improve the understanding of these interactions and ultimately the ocean analysis and forecasting, further investigations are of significant importance.

In this study, recently published in Ocean Dynamics, Emil Stanev from the Institute of Coastal Research of the Helmholtz-Centre Geesthacht and Marcel Ricker from the Institute for Chemistry and Biology of the Marine Environment of the University of Oldenburg investigate barotropic tides and mesoscale processes in the East Atlantic Ocean, a steep continental slope, and the European Northwest Shelf. By turning barotropic tidal forcing on and off in a numerical model, the results provide good information to analyse the interactions between the ocean and currents in deep ocean and shelf regions.

“Topographic features are important in transferring energy from barotropic to baroclinic tides. Most studies in this field have focused on the generation of and interactions between barotropic and baroclinic tides. Tide-eddy interactions have not been sufficiently addressed in the transition areas among shelves, continental slopes, and deep oceans” the authors explain.

Therefore, the study region chosen in this study covers a very large area of a complex system of currents (Fig 1). NEMO, a state-of-the-art hydrodynamic ocean model, which is known to adequately simulate tidal mixing on the shelf, the formation of tidal fronts, seasonal cycle and the modification of tidal ellipse by stratification, ensures the credibility of modelling results.

After tidal forcing was turned on, substantial changes in model dynamics could be recorded. The authors demonstrated that barotropic tides characterized by large scales enhance variability at small spatial scales. The two-way interactions between barotropic tides and mesoscale processes were revealed in the analysis of the M2 and M4 tidal constituents, as well as by the significant influences from barotropic tides on the interactions between the atmosphere and ocean. Stanev and Ricker demonstrated that tidal forcing intensifies the transient processes, which in turn affect the wave number spectra, in particular in the transition areas from the deep ocean to the shelf. In these areas, that mesoscale turbulence appeared not isotropic. The overall effect of including barotropic tides in an ocean model is to regionally re-distribute the ratio between the horizontal and vertical scales of motion and to substantially influence the diapycnal mixing.