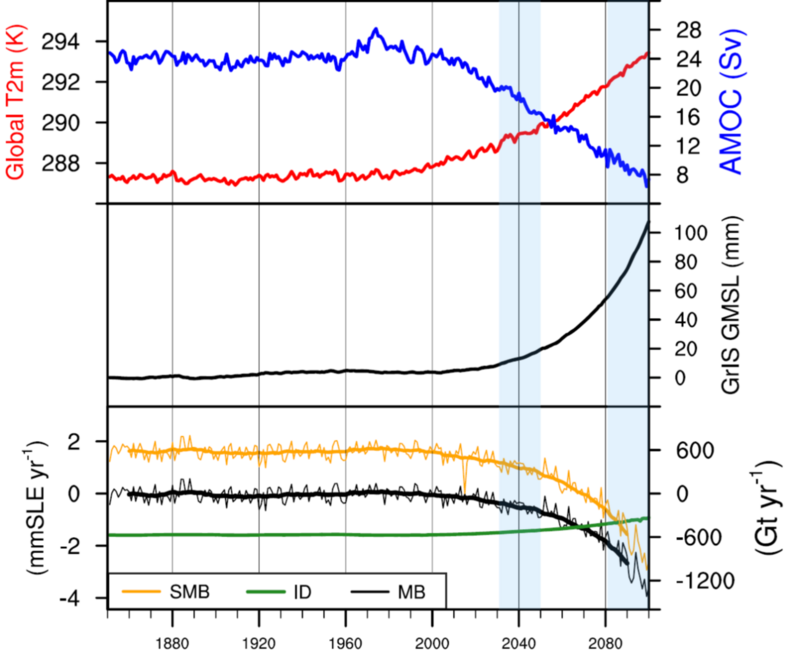 Carolina E. da Silva was a PhD student at the Department of Geoscience and Remote Sensing of the Delft University of Technology, Netherlands. She is alumni of the ESM Summer School 2019 in Bad Aibling, Germany.

Due to the global warming, the Greenland Ice Sheet (GrIS) is losing mass in a fast rate. The last IPCC report pointed out that the GrIS meltwater became an important contributor to the global mean sea level and cannot be neglected in the future predictions.

Our recently published study addresses the GrIS contribution to the sea level in the 21st century and its impacts on the large-scale ocean circulation. The simulations were performed with the Community Earth System Model (CESM 2.1) – a fully coupled Earth System model - with an interactive Greenland Ice Sheet model (CISM 2.1). This novel coupling captures in a better way the ice sheet-SMB-climate feedbacks compared to other climate models. The simulation covers the period from 1850 to 2100. From 2015, it was introduced the SSP5-8.5 scenario where the atmospheric CO2 concentration is 1142 ppmv, by 2100, and the radiative forcing is 8.5 W.m-2.

The main findings highlight the role of the GrIS in the global mean sea level. The projected GrIS contribution to the sea level rise is 109 mm by 2100. The Southern portion of Greenland is the major supplier of freshwater to the ocean, given the rapid expansion of the ablation zones by mid-century.

In this scenario, the North Atlantic Meridional Overturning Circulation (NAMOC) decreases from 21 Sv (2015) to 6 Sv (2100). Despite this sharp decrease and fast response of the NAMOC, the new input of freshwater from GrIS seems to play a minor role in the weakening. By the time that the GrIS has the greatest amount of freshwater discharged into the ocean, the NAMOC is already in a weaker state compared to the contemporary time.

In this simulation due to complexities in the coupling, the Ice sheet model does not ‘feel’ the ocean changes. Thus, as a next step to better simulate the ocean-ice sheet feedbacks, we would like to introduce the full coupling between the Ice Sheet and Ocean models.