How do large-domain Hydrologic Models perform across the Contiguous United States? 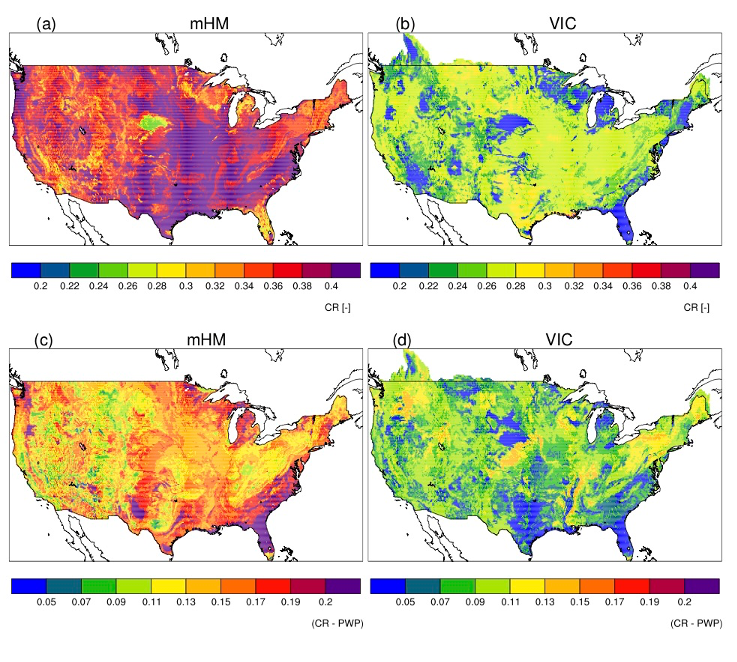 Figure: Spatial pattern of two selected soil parameters: critical point (CR) of (a) mHM and (b) VIC, and dynamic range representing the difference between CR and permanent-wilting point (PWP) of (c) mHM and (d) VIC.

Estimating spatially distributed hydrologic parameters is still a major challenge in large-domain hydrologic modeling efforts. This is because current techniques have a hard time using available spatially distributed geophysical information (e.g., soil and land cover maps) to estimate parameter sets where model calibration is not possible. Although there are several studies that performed large-domain parameter regionalizations, the field is still rather immature, and consensus regionalization methods for large domains have not been clearly established.

However, as confirmed by several studies, bright prospects are likely to come out of a promising approach to obtain spatially continuous, calibrated parameter sets: the Multi-scale Parameter Regionalization (MPR; Samaniego et al, 2010). This method explicitly accounts for sub-grid variability of hydrological processes and has been initially implemented in the mesoscale Hydrologic Model (mHM). The first implementation of MPR into the Variable Infiltration Capacity model (VIC; Liang et al 1994), being one of the four models used in NLDAS, produced an improved spatial pattern of the model parameters (i.e., no spatial discontinuity in parameter fields at the boundaries of calibrated watersheds). Nonetheless, the evaluation of simulated streamflow revealed limited improvements in streamflow (Mizukami et al, 2017).

The new study of Rakovec et al (2019) presents a diagnostic evaluation of two large-domain hydrologic models: mHM and VIC over the Contiguous United States (CONUS).  Both models have been calibrated using the MPR scheme in a joint, multi-basin approach using 492 medium-sized basins across the CONUS yielding spatially distributed model parameter sets. The mHM simulations are used as a performance benchmark to examine performance deficiencies in the VIC model.

Although the differences between both models are marginal in terms of the major water cycle components, sub-annual fluxes exhibit strong differences in partitioning the precipitation into evapotranspiration (ET) and runoff. The new paper shows that after calibration to streamflow, VIC generally overestimates the magnitude and temporal variability of ET as compared to mHM, and this is true also for the FLUXNET observation-based ET product. These features result in an underestimation of the mean and variability of runoff.

The paper also diagnoses the internal functioning of the VIC model by looking at the relationship of the evaporative fraction versus the degree of soil saturation and compare it with that of the mHM model, which has a different model structure, a prescribed non-linear relationship between these variables and exhibits better model skill than VIC. Despite these limitations, the VIC-based CONUS-wide calibration constrained against streamflow exhibits better ET skill as compared to two pre-existing independent VIC studies.