Impact of unexpected Chlorofluorocarbon-11 Emissions on the Ozone Layer 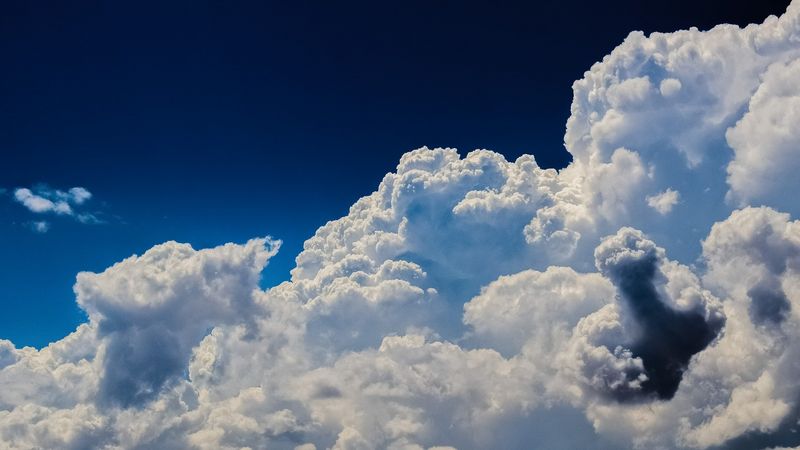 For the first time, a Chemistry-Climate Model (CCM) has been used to assess the impact of unexpected emissions of chlorofluorocarbon-11 (CFC-11, CFCl3) on the stratospheric ozone layer (Dameris et al., 2019). The results of this numerical model study do not show dramatic consequences for the global mean ozone layer due to an enhanced CFC-11 surface mixing ratio for the coming years, but indicate relevant changes in the polar regions in winter and spring. Without a continued strong regulation of CFC-11 and other emissions of ozone-depleting substances, the recovery of the ozone layer could be significantly affected, including the timescale of ozone hole closure.

This numerical model study was motivated by the observed global deviation from assumed emissions of CFC-11 in recent years. Montzka et al. (2018) discussed a strong deviation of the assumed emissions of CFC-11 over the past 15 years, which indicates a violation of the Montreal Protocol for the protection of the ozone layer. An investigation is performed which is based on simulations with the CCM EMAC that analyze the consequences of an enhanced CFC-11 surface mixing ratio. The presented results enable an approximate and most likely upper limit assessment of how much the unexpected CFC-11 emissions to date have already affected ozone. The total column ozone (TCO) in the 2040s (i.e., the years 2041–2050) is particularly affected in both polar regions in winter and spring. Maximum discrepancies in the TCO values are identified with reduced ozone values of up to around 30 Dobson units in the Southern Hemisphere (SH) polar region during SH spring (in the order of 15 %). An analysis of the respective partial column ozone (PCO) for the stratosphere indicates that the strongest ozone changes are calculated for the polar lower stratosphere, where they are mainly driven by the enhanced stratospheric chlorine content and associated heterogeneous chemical processes. Furthermore, it was found that the calculated ozone changes, especially in the upper stratosphere, are surprisingly small. For the first time in such a scenario, a complete ozone budget analysis regarding the production and loss cycles has been performed. In the upper stratosphere, the budget analysis shows that the additional ozone depletion due to the catalysis by reactive chlorine is partly compensated for by other processes related to enhanced ozone production or reduced ozone loss, for instance from nitrous oxide. It was found that no major ozone changes can be expected after the year 2050, if the CFC-11 emission would be immediately stopped as stipulated by the Montreal Protocol. 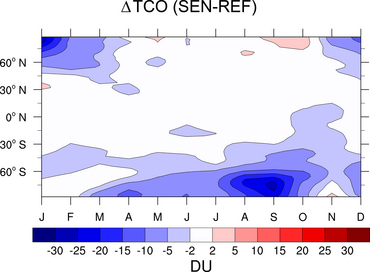 Mean annual cycle of total column ozone (TCO) differences (in Dobson units, DU) between a model simulation with enhanced CFC-11 mixing ratios and a simulation in compliance with the guidelines of the Montreal Protocol (Figure 3 in Dameris et al., 2019).