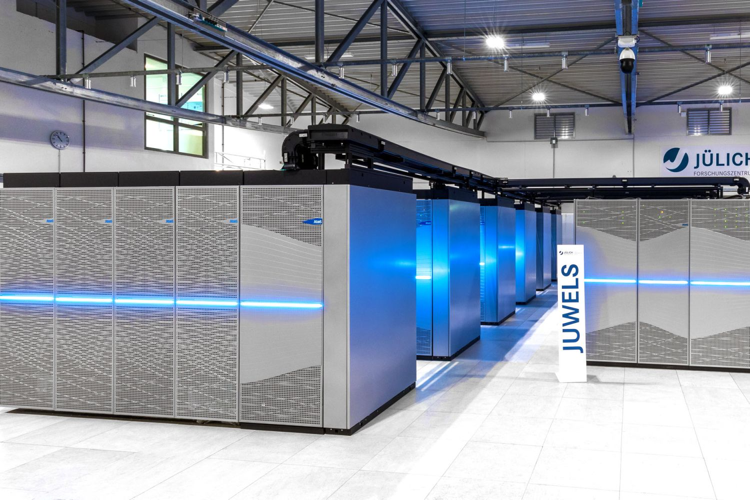 The JUWELS Booster Module, recently installed at Jülich Supercomputing Centre (JSC) - Forschungszentrum Jülich (FZJ), debuts at number 7 on the 56th Top500 list of the world's fastest computers, published on SC20’s virtual proceedings.Thanks to this new booster, JUWELS is now able to massively expand the application limits of simulations and also offers the strongest platform in Europe for the use of artificial intelligence (AI).

Powered by AMD Eypc Rome CPUs and Nvidia A100 GPUs with HDR InfiniBand, the JUWELS Booster Module is a BullSequana machine built by Atos, a global leader in digital transformation headquartered in France, that leverages a modular system architecture. It is a companion system to the Intel Xeon-powered JUWELS Module that also appears at position 44 on the list — and both were integrated using the Modulo Cluster Software Suite from Munich-based supercomputing specialist ParTec. The supercomputer also scored third place on the Green500, which takes energy efficiency gains into account, and is the world’s most energy-efficient supercomputer in the highest performance class.

The TOP500 list is compiled by Erich Strohmaier and Horst Simon of Lawrence Berkeley National Laboratory; Jack Dongarra of the University of Tennessee, Knoxville; and Martin Meuer of ISC Group, Germany. The first version of this list started as an exercise for a small conference in Germany in June 1993; nowadays, it has become a much-anticipated, much-watched and much-debated twice-yearly event.

A 20% share of the JUWELS cluster at Forschungszentrum Jülich dedicated to Earth System Modelling (ESM) has been financed by BMBF. Researchers from all HGF institutions in the research field Earth and Environment are eligible to apply for resources on the ESM partition, together with their cooperation partners outside the HGF. Resources are primarily provided to the Helmholtz ESM project for scientific software implementation and production runs as well as preparation of ensuing frontier simulations. It is also foreseen that the GPU based JUWELS booster module, which is planned for 2020, will be extended with an ESM partition. More information on our dedicated Intranet page.