Record Low Ozone Values Observed over the Arctic in Spring 2020 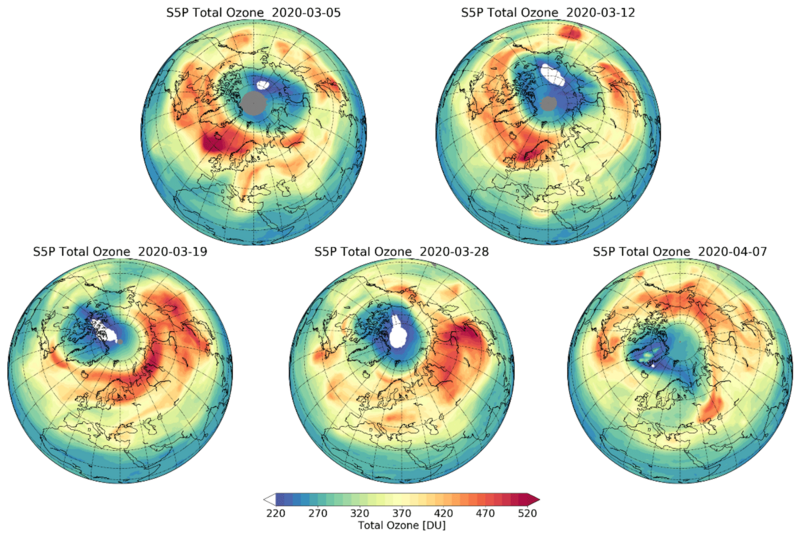 Low ozone values can be observed in both polar regions in the stratosphere, if the chemical and dynamical conditions allow it. The most outstanding example are the ozone holes in the south polar region, which occur regularly in austral spring. To quantify them, the total amount of ozone found in the atmosphere is described by Dobson Units or DU and measured for instance by satellite instruments. In spring 2020, low Total Ozone Column (TOC) values in the Arctic were observed via satellite but also confirmed from ground stations: the minimum ozone values measured were below 220DU for a period of approximately five weeks. The 220DU limit is by definition the benchmark for an ozone hole in the south pole region, indicating a reduction of about 30% below the mean ozone value in austral spring before 1980. In comparison with the averaged mean TOC values for boreal spring, this is an ozone reduction in the order of 50%. These low values are normally detected when the incoming sunlight provides the required energy to the system for the chemical process of ozone depletion in combination with reduced ozone transportation into the polar vortex due to reduced wave activity and low temperatures.

In the case of 2020, considering the chemical conditions at the time, low TOC values were not unexpected but still extraordinary, since in 2020, the stratospheric chlorine content, which is an indicator for ozone-depleting substances like chlorofluorocarbons (CFC) concentration, was known to be lower than in previous years. But generally, ozone-depleting substances in the atmosphere are still high in concentration with respect to the 1980s, even though they have been regulated since 1987. Considering the occurrence of the undisturbed polar stratospheric vortex and its low temperatures and integrating the dynamical conditions that have a primary effect on strong ozone decreases, low TOC values were not unexpected.

Similar dynamical conditions were noted in spring 1997 and 2011 with strong and cold stratospheric polar vortices. In 2011, the meridional transport was weak due to the strong barrier at the edge of the polar vortex throughout the winter, leading to less ozone transportation. A severe ozone reduction was observed, but not as severe as in 2020. In 1997, the period of strong zonal winds continued until April and the ozone loss was moderate due to the late polar vortex development, in comparison with the other two years. In all three cases, stratospheric temperatures were low in the polar cap region but the daily areas with very low temperatures were larger in 2020. Although the stratospheric chlorine content was higher in both 1997 and 2011, TOC values were not as low as in 2020. Among others, this highlights the importance of an early development of a strong polar vortex in relation to ozone reductions.

The particular ozone observations in boreal spring 2020 and its analyses are currently a hot topic of atmospheric research. In this context, several studies have been published already and, a joint special issue of Geophys. Res. Lett. and J. Geophys. Res. was created.  Such an extraordinary state of the atmosphere can be taken as a benchmark for ESM evaluations.

The data used by the authors for this research were derived from the European Centre for Medium-Range Weather Forecasts’ most recent atmospheric reanalysis, ERA5, covering the period from 1979 to 2020. Satellite TOC data was taken from GTO-ECV and TROPOMI.