Rift Heterogeneity as a Natural Byproduct of Fault Network Evolution 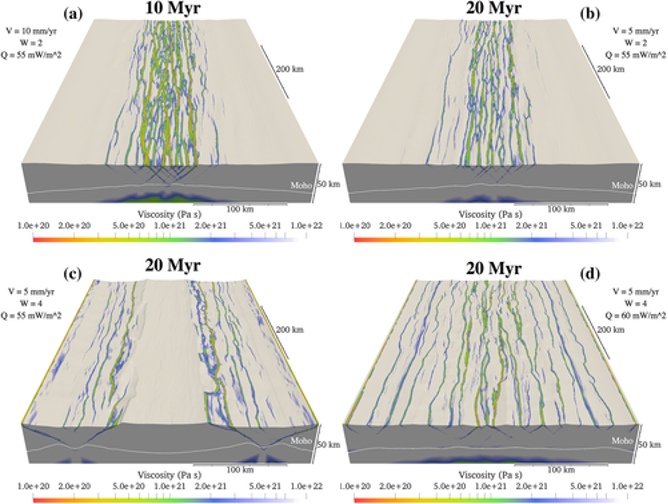 Active deformation (a,c) and accumulated brittle deformation (b,d) after 8 and 12 Myr of extension at 10 mm/yr, which illustrate the transition from distributed to localized deformation through time.

The formation of continental rifts mostly takes place at previously damaged lithosphere, like in the East African Rift or the North Sea Rift, for instance. These rifts are guided by inherited weaknesses, but to which degree this inheritance is influencing the evolution of fault networks remains an open question. Over time, rift-parallel heterogeneity is developing with large variations in width, structure, sedimentation and magmatism.  2-D numerical approaches have shown that many of these variations reflect the initial rheological structure, but they failed to display this rift-parallel component of deformation.

Thanks to the technical improvements of the last years, 3-D simulations of these processes at reasonable resolution are now computationally tractable. Nevertheless, only a few studies have investigated the reasons behind the along-strike heterogeneity of continental rifts. However, most of them did not include a well-resolved initial phase of distributed normal faulting, which is important during the later stages of rifting.

The investigations made in this paper, published in May 2020 in Geophysical Research Letters, are the result of a collaboration between authors working at the University of California, GFZ and the Geological Survey or Norway. For their analysis, the 3-D thermal-mechanical evolution of continental extension was modelled using the open-source and CIG-supported finite element code ASPECT version 2.0.1-pre. The model domain was 500 x 500 x 100 km, with a numerical resolution of 1,25 and 2,5km, respectively, above and below 50km depth. The Lithosphere was subdivided into three layers, namely the upper crust, the lower crust and the mantle lithosphere. Deformation is located in the centre of the model domain by prescribing random values for plastic strain. By setting an outward velocity at the model sites, the deformation process is kept going during the simulations.

After 8 million years of model run, the initial phase of rifting is clearly illustrated with rather small faults spanning tens of km in length, evenly distributed across the 100-150km wide rift zone. Along-strike heterogeneity is already present at this stage with fault offsets and localized rotation of fault orientations. By extending the model run to 12 million years, the rift zone is narrowing to 50km, accompanied by the linking of several fault segments where some faults spanning 100-200km in length. The accumulated deformation reveals a complex pattern of wide finite shear zones. As last step, the model run was extended to 20 million years with several initial conditions being slightly changed.

The model results reveal that distributed fault networks naturally evolve to produce rift-parallel structural heterogeneity over large length scales. A stronger fault weakening, for instance, resulted in the formation of multiple rift basins, while higher geothermal gradients promoted the formation of widespread distributed fault networks. This is evidence for the complex natural evolution of fault networks being responsible for along-strike variations in rifted structures. Follow-up work is already planned, using the recently developed Newton Solver by Fraters et al., 2019 for greater efficiency and accuracy of the model.