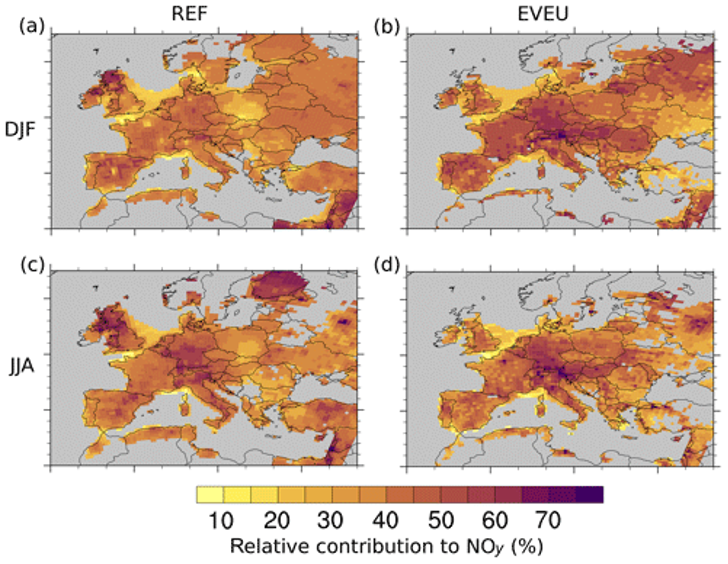 Mobility is playing a key role in our everyday life. But as many vehicles still rely on combustion engines, land transport presents to be a key emission source of nitrogen oxides (NOy), carbon monoxide (CO) and volatile organic compounds (VOC). These gases contribute to the formation of tropospheric ozone, which influences air quality negatively and furthermore acts as a greenhouse gas.

To do so, a global-regional model chain, called the MECO(n) model system (MESSy-fied ECHAM and COSMO models nested n times) was applied. This model system couples a global and a regional chemistry climate model. “MECO(n) model allows for a consistent zooming from the global scale into specific regions of interest”, the researchers wrote.

The global model resolution is 300km, and for this study two regional model refinements were applied for Europe and Germany with 50km and 12km resolution, respectively.

To quantify the effects of a specific emission source, a tagging method was applied in the MECO(n) model, simultaneously and constantly on both the global and regional scale. The total emissions were decomposed into ten different source categories, namely following: land transport, anthropogenic non-traffic, shipping, aviation, lightning, biogenic, biomass burning, CH4, N2O and stratosphere.

To account for the variable effects of uncertain future emission scenarios, two simulations with different anthropogenic emission inventories were performed, called REF and EVEU inventory. Contributions were investigated for the summer season (JJA) and the winter season (DJF). The simulation period ranges from July 2007 to January 2011.

The results of the study showed that 50 - 70% of ground-level NOy can be attributed to land transport emissions for most parts in Europe. The largest values were identified in areas with high traffic volume, such as south England, around Paris and southern Germany. Generally, absolute contributions during winter are larger than during summer, but the seasonal differences are smaller than the differences between different emission inventories. This has also been the case for CO, where the absolute contribution ranges from 30 nmol/mol to 75 nmol/mol near emission hotspots like Moscow or Paris.

In addition, the contributions of land transport emissions to ozone have been analysed. As ozone acts as a secondary pollutant and many natural and anthropogenic sources of ozone precursors exist, the relative contribution is lower for ozone as for reactive nitrogen and ranges from 8 to 16% during summer. The geographical distribution of ozone differs from those of reactive nitrogen. A clear north-west to south-east gradient is noticeable, with the largest values occurring around the Po Valley. This is mainly due to the non-linear behaviour of ozone chemistry. Especially during summer, biogenic emissions strongly influence ozone production.

With the help of the newly developed chemistry-climate model MECO(n) the contribution of the land transport sector to ozone production in Europe could be further and better investigated. However, the results give no information about how ozone level changes when certain emissions sources are reduced. Combinations of tagging methods and emission reductions are planned for follow-up studies. Follow-up studies using observational data and aircraft measurements are already planned. This way, future mitigation options can be identified and evaluated. 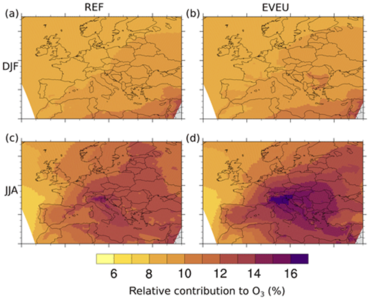