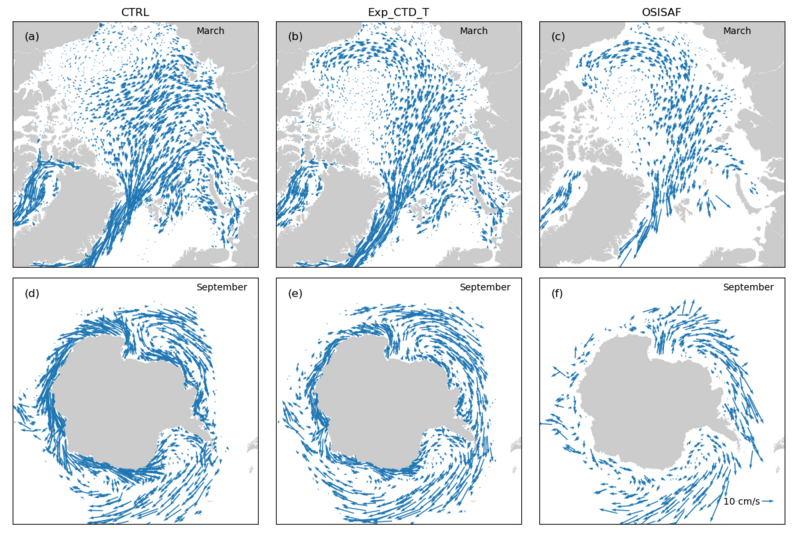 Sea ice is an important component of the Earth system because it strongly influences heat exchanges between the ocean and the atmosphere. Models are used to predict the state of the sea ice over time scales from days to years.

In this study, recently published in the Journal of Advances in Modeling Earth Systems, Longjiang Mu and his colleagues from the Alfred Wegener Institute Helmholtz Center for Polar and Marine Research developed and assessed a seamless sea ice prediction system with a focus on the so-called data assimilation component. Data assimilation is the methodology that combines models with real observational data. In the study the methodology is used to generate improved model fields which are then used to initialize the computation of model predictions. Other applications of data assimilation are the assessment of model error and the optimized representation of model processes.

With assimilation the sea ice and the ocean circulation become more realistic as can be shown when comparing with independent, non-assimilated, observations. In general, the data-assimilation methodology is configured in a way that each observation type can influence all model variables. These effects can be assessed by studying single data types. For example, the sea ice drift velocities help to improve the representation of the sea ice thickness and the sea surface temperature observations improve the circulation at mid depth.

The study is an important step toward a fully-featured sea-ice prediction system. It further builds the sea-ice component of the assimilation system that is currently developed in the ESM-project. Here, also other observations of the ocean and the atmosphere will be assimilated to find good initial fields for prediction simulation, but also for the assessment of the model skill.